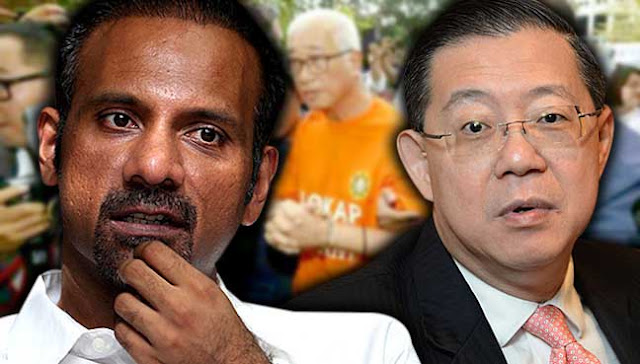 PETALING JAYA: Lawyer Ramkarpal Singh today said Lim Guan Eng was justified in describing the recent detention of Penang state executive councillor Phee Boon Poh by the Malaysian Anti-Corruption Commission (MACC) as “illegal”.
He said the MACC’s ultimatum yesterday to the chief minister to apologise for his reported statement at a press conference on Thursday within 48 hours or face legal action was ill-advised.
He said Judicial Commissioner Abdul Wahab Mohamed, in setting aside the five-day remand order issued on Aug 12 against Phee and two other men, had effectively ruled that their detention was illegal since it was based on an invalid order.
“Since the trio were detained based on an invalid order, the effect of the learned judicial commissioner’s decision was that they were indeed detained illegally by the MACC 24 hours after their arrest,” he said.
“In the circumstances, there can be no doubt that the CM was justified in describing the said detention as illegal,” he said in a statement today.
Wahab had made the ruling on the order, made against Phee and two owners of an illegal carbon processing factory at Sungai Lembu in Seberang Perai, at the Penang High Court on Aug 14.
In its statement yesterday, the MACC had said that after analysing audio and video clips of the press conference, Lim had clearly been found to have uttered the words “illegal detainment by MACC” when replying to reporters’ questions about Phee’s detention in regard to the factory.
The anti-graft agency said it took a serious view of what Lim said and considered it to be malicious slander intended to damage the good name of the agency, as well as tarnish and ruin its reputation.
It also said the quote by Lim was reported by the New Straits Times on Thursday.
Lim made the remark when he denied having any knowledge of a Department of Environment (DoE) letter following its investigation into the illegal factory.
The letter had reportedly been issued to the Seberang Perai Municipal Council (MPSP) and Penanti assemblywoman Norlela Ariffin two years ago.
Ramkarpal also dismissed the MACC’s warning that commenting on the court decision on the detention may be in contempt of court and sub judice as it had filed an appeal against the decision.
He said neither Phee nor his lawyers had received a copy of the notice of appeal. As such, they were not aware that such a notice as claimed in the MACC statement had been filed, he added.
“In the circumstances, the question of the CM making comments which may be sub judice and possibly being in contempt of court does not arise for the simple reason that the MACC has not even bothered to notify Phee or his lawyers that it has appealed against the said decision,” Ramkarpal said.
“Even assuming commenting on the said detention order is sub judice, how can the CM be said to be in contempt of court if he is not aware that an appeal is pending since we have not been served the said notice of appeal?” he added.
Ramkarpal said the MACC should instead explain how information regarding the freezing of four bank accounts belonging to Phee had been leaked and made public.
Share to: