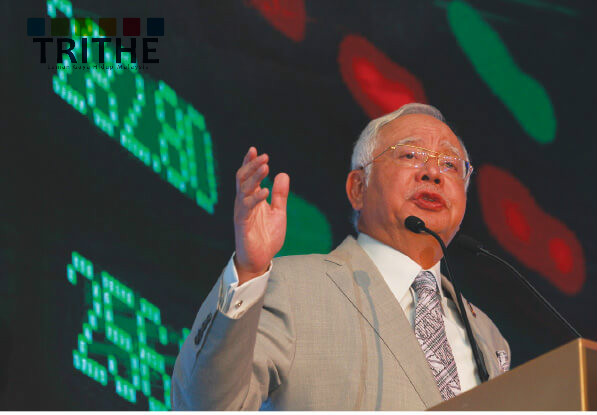 Prime Minister Datuk Seri Najib Razak has publicly admitted for the first time that there were lapses in governance at troubled investment fund 1Malaysia Development Bhd (1MDB), but pointed out that the government has taken steps to address the matter.
“At 1MDB, it is now clear that there were lapses in governance. However, rather than burying our heads in the sand, we ordered investigations into the company at a scale unprecedented in our nation’s history.
“Rather than funnelling good money after bad to cover up any issues 1MDB may have faced — the model embraced by a former leader — I instructed the rationalisation of the company,” he said, in a veiled jab at former prime minister Tun Dr Mahathir Mohamad, during his opening speech at Invest Malaysia 2017 yesterday.

He also said the rationalisation plan is going well, pointing out the progress made by the Tun Razak Exchange.
While there clearly were issues at 1MDB, he said the troubles were blown out of proportion by certain politicians to sabotage the company in an attempt to topple the government.
“At the time, we knew the real issue was not 1MDB, and that if 1MDB hadn’t been around, they would have chosen another line of attack to try to illegitimately change the government. So, we stood steadfast and resolute in the face of this orchestrated campaign,” said Najib.
In Malaysia, 1MDB was investigated by Parliament’s Public Accounts Committee (PAC) and a special task force comprising the Malaysian Anti-Corruption Commission (MACC), the Royal Malaysia Police and Bank Negara Malaysia (BNM). The Auditor-General (AG) also conducted an audit of the fund.
The PAC’s report on its investigation was tabled in Parliament on April 7, 2016. However, the AG’s report was classified under the Official Secrets Act 1972 in March 2016.
Shortly after the tabling of the PAC report, the police said they had formed a special task force to investigate 1MDB.
Also in April 2016, 1MDB was fined an undisclosed amount by BNM for “failure to comply with directions under the Financial Services Act 2013”.
Meanwhile, Second Finance Minister Datuk Seri Johari Abdul Ghani said 1MDB is not a representation of Malaysia’s overall corporate and public governance, as the country has produced a number of well-run government-linked companies (GLCs).
“With regard to 1MDB, we [have] openly admitted that this is an issue of having the wrong business model, weak management and weak governance. We are addressing the issues, but we are not in a situation where because of this issue, the entire country will collapse,” he said in a panel discussion at the two-day conference.
Johari pointed out that Malaysia has a number of GLCs that are well run, including CIMB Group Holdings Bhd, Tenaga Nasional Bhd, Telekom Malaysia Bhd and PLUS Malaysia Bhd.
“These are all good companies under Khazanah [Nasional Bhd] that are well run, and they don’t need government’s help. To say that the government does not have good governance, it’s not right,” he said.
In light of the issues surrounding 1MDB, Najib announced that the government will be setting up an integrity and governance unit at all GLCs to improve transparency and accountability.
The announcement comes amid the recent brouhaha at Felda Global Ventures Holdings Bhd, which was subjected to an investigation by the MACC after the now-suspended group president and chief executive officer Datuk Zakaria Arshad alleged the existence of abuse of power and corruption in the group’s operations.

“The government has, in principle, agreed to the establishment of an integrity and governance unit at all GLCs and state- and ministry-owned business entities, under the supervision of the MACC, precisely to strengthen the confidence all can, should and do have in Malaysia,” Najib said.
Najib also said the government is cracking down on crony capitalism, which he said has benefited the few at the expense of the Malaysian people.
“Under this government, we are cracking down on crony capitalism. No more sweetheart deal. No more national follies kept going to stroke the ego of one man. No more treating national companies as though they were personal property.
“It is the people who suffer and we will not tolerate a few succeeding — and not on their own merits — while the many are denied opportunities, all for the interests of a selfish few,” he said.
Share to: