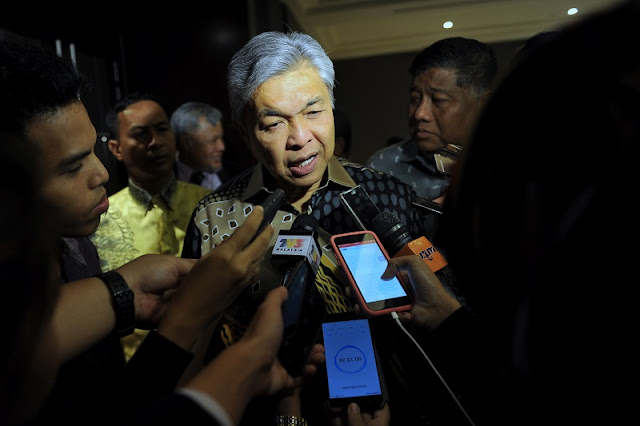 The home minister has passed on the decision to investigate Inspector-General of Police Tan Sri Khalid Abu Bakar following claims linking the latter to a man purportedly collecting “protection money” for the force to the Malaysian Anti-Corruption Commission (MACC).
Datuk Seri Ahmad Zahid Hamidi said his ministry will not comment on the case as the MACC is handling investigations now.
“For your information Yang Berhormat, the ministry does not plan on commenting further in this matter since the case is still under MACC’s investigation, and it is up to the discretion of MACC whether to summon the IGP to provide statements or otherwise,” he said in a written parliamentary reply dated July 25.
He was responding to a query by Parti Amanah Negara’s Sepang MP Mohamed Hanipa Maidin, who asked why no action had been taken against Khalid who had admitted that he and his family were in contact with the alleged middleman who has been taken in by Melaka MACC officers.
In a press conference in June, Khalid  said that he and his family members were all known to the man but rejected allegations that they was involved in criminal activities.
London-based whistleblower website Sarawak Report had claimed that several middlemen had been detained during an anti-corruption sting in Melaka, with the man known to Khalid at the centre of the “protection money” racket and illegal gambling outlets that had been running for several years.
The MACC has arrested 13 individuals suspected related to the case since May.-themalaymailonline.com