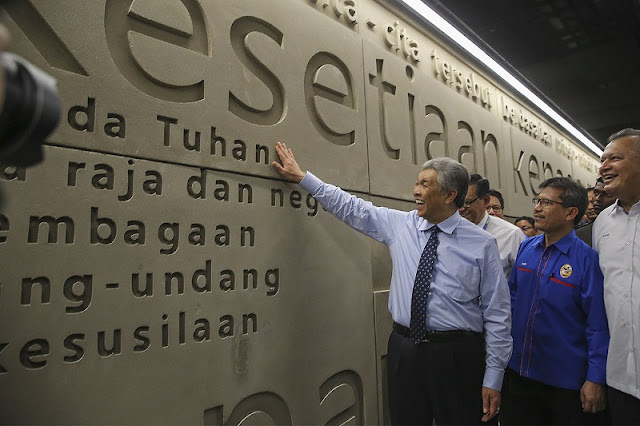 Datuk Seri Ahmad Zahid Hamidi should temporarily relinquish control of the Home Ministry after publicly revealing Tun Dr Mahathir Mohamad’s identity card information, said DAP lawmakers.
DAP legal bureau chief Gobind Singh Deo said this was necessary to allow unbiased investigation against Ahmad Zahid over the incident.
As home minister, the country’s law enforcement agencies are subordinate to Ahmad Zahid.
“I call upon Zahid to step aside as home minister while investigations against him are carried out as there would be a case of conflict of interest in the matter if he remains home minister, who oversees the work of the police in Parliament,” he said in a press conference today.
Several police reports have been lodged against Ahmad Zahid and the director-general of the National Registration Department (NRD) over the former’s public disclosure of Dr Mahathir’s “blue IC” yesterday.
DAP’s Kluang MP Teo Nie Ching also submitted a motion seeking for Ahmad Zahid to be censured for allegedly violating parliamentary rules.

She said it was wrong for the minister to allegedly violate the Personal Data and Protection Act by revealing such details in public.
“Such an act is unethical and should not be done by a minister. A minister that does not respect the law is a threat to the public. This incident will deter the faith people have in the government,” Teo wrote in her submission.
While opening an Umno division meeting yesterday, Ahmad Zahid said he was informed by the NRD that Dr Mahathir’s original name was “Mahathir a/l Iskandar Kutty.”
Although the deputy prime minister did not specifically name Dr Mahathir, he referenced the former prime minister’s catchphrase as well as his 22 years in power.-themalaymailonline.com
Share to: