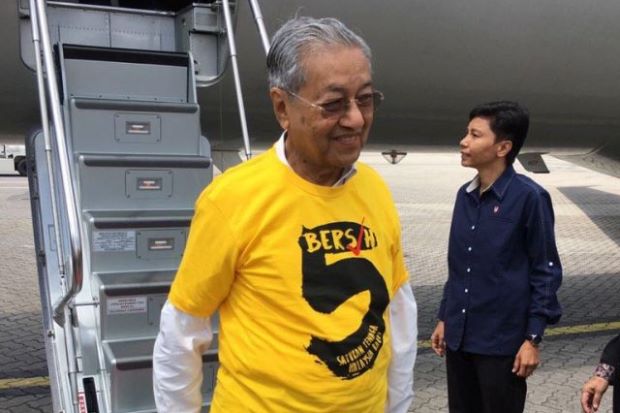 PETALING JAYA: Former premier Tun Dr Mahathir Mohamad (pic) has returned from Sudan and will be attending the Bersih 5 rally in Kuala Lumpur.
Sufi Yusof, Dr Mahathir's aide, said that the Parti Pribumi Bersatu Malaysia (Pribumi) chairman, flew back from Sudan after a conference, and his plane touched down at the Subang airport at about 12.30pm.
"He stepped off the plane dressed in a yellow Bersih 5 t-shirt worn over his white collared shirt."
“He is heading to Kuala Lumpur now,” said Sufi.

Dr Mahathir appeared in a video on Wednesday urging Malaysians to participate in the rally.
Clad in a Bersih t-shirt, Dr Mahathir said Malaysians need to show their dissatisfaction with the government through participation in Bersih at Dataran Merdeka and other places.
“I hope all Malaysians will participate in the demonstrations by Bersih,” he said in the two-minute video.
In 2015, Dr Mahathir attended Bersih 4.0 with his wife.
On Sunday, Dr Mahathir was seen wearing a ‘Free Anwar’ badge at the Pakatan Harapan convention in Shah Alam.


However, Dr Mahathir banned protests and assemblies during his 22 years as prime minister.