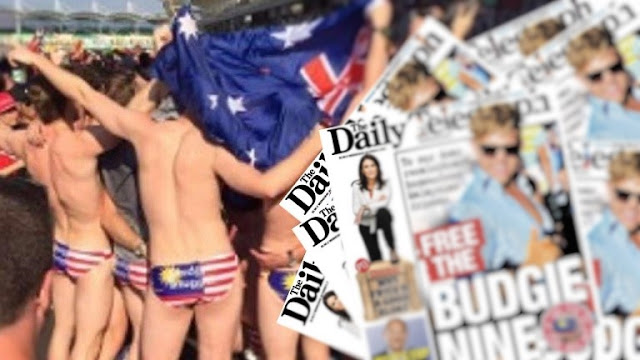 An Australian conservative tabloid branded Malaysians “recalcitrant” and “humourless” today for detaining nine of its citizens who stripped down to briefs displaying the Malaysian flag at the Formula 1 circuit in Sepang.

The Daily Telegraph also called those nabbed as “Budgie Nine”: a reference to the Budgy Smugglers brand of swimsuit they wore, and a play on the “Bali Nine”, a group of nine Australians arrested and convicted for smuggling heroin from Indonesia to Australia.

“To our dear recalcitrant, humourless Malaysian friends… Free the Budgie Nine,” said its front page headline today, with a smiling photo of businessman Edward Leaney, one of those arrested.

“Budgie” is an alternative spelling of of “budgy”, the short name for budgerigar, a small parakeet native to Australia.

On its front page, the paper had described many among the arrested as “party-loving, high-achieving University of Sydney graduates”.

It also branded Deputy Home Minister Datuk Nur Jazlan Mohamed as “recalcitrant”, and the stripping act as mere “larrikinism” — an Australian English term for mischief by young and rowdy men, who are ultimately good-hearted.


The “recalcitrant” jab was likely referring to the term used by then Australian prime minister Paul Keating to veteran statesman Tun Dr Mahathir Mohamad in 1993, when the latter refused to attend the first Asia-Pacific Economic Co-operation summit in Seattle, United States.

The nine Australian men, aged between 25 and 29, were nabbed for public indecency and for allegedly disrespecting the national flag after they stripped to their briefs in public at the Sepang Formula 1 circuit last Sunday.

They reportedly flashed their custom-made swimwear, which had the Malaysian flag design, in a crowd while chanting and shaking the Australian flag to celebrate Australian Daniel Ricciardo’s first Formula One victory of the season.

The Australian reported that several of the families and close friends of the Australians met last night to discuss the situation.

International newswire Reuters reported the authorities as saying yesterday that the Australians could face indecency charges or deportation.

Australian Foreign Minister Julie Bishop has since said the nine must face the consequences of their “foolish prank”.