DR M TELLS MALAYS: BE SMART LIKE THE CHINESE & DUMP NAJIB NO MATTER WHAT 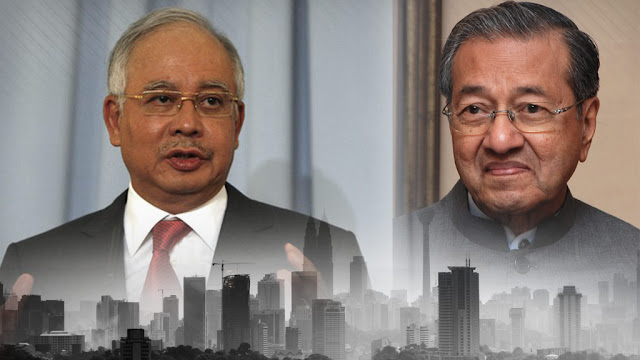 Former premier Dr Mahathir Mohamad today urged Malays to emulate their Chinese counterparts in making their case against Prime Minister Najib Abdul Razak.
Mahathir said Malays, like the Chinese, should transcend party lines when their interests are under threat.

"We need to think about our interests.

"I see the Chinese, if the interests of their race are threatened, they will forget about their party interests," he told a high tea function at which he was the main star.
As such, he urged Umno members to put Malay interests - which he claimed are under threat under Najib's leadership - first.
Zooming in on Umno members in Pekan, Mahathir urged that they continue supporting the party but they should vote against Najib in the next general election.
"If Malays are smart, they will ensure Pekan is lost.
"Do not let Umno lose, but ensure Najib is defeated," he said to loud applause from the floor.
Najib is the MP for Pekan.
Najib fears jail

Mahathir also urged Malays not to be influenced by cash handouts given by politicians.
This, he said, was essential in ensuring Najib is removed from power.
Mahathir also reiterated that Najib refuses to step down because he fears he may be imprisoned for alleged criminal wrongdoing.
The embattled prime minister is embroiled in controversy over the deposit of RM2.6 billion in his personal bank accounts.
In response to allegations that the money is from 1MDB, Najib has only denied taking public funds "for personal gain", while his supporters claim the money was a political donation to Umno from the Middle East.
Earlier this week, Najib, who was in New York for the United Nations general assembly confidently told fund managers there that his position of power is secure.
He told investors that he was in no hurry to return to Malaysia as he did not fear a coup.
He is presently in Italy for the Expo Milano, at the invitation of the Italian prime minister.
Mahathir added that he was confident the value of the ringgit will go up when Njib steps down.
He added that Najib's RM2.6 billion, which he claimed was linked to 1MDB, was the cause of the ringgit's crash. The ringgit has falled to a low of RM4.45 to a US dollar.
"I am that confident if Najib is no longer prime minister, our ringgit will go back up and the carnage will be over," he said.
Even Bank Negara governor Zeti Akthar Aziz, Mahathir added, had also concurred that the ringgit would recover when the 1MDB issue is resolved. - M'kini