THE SON OF PENANG STATE DAP EXCO, FROM PROTON WIRA TO BENTLEY, OVERNIGHT. 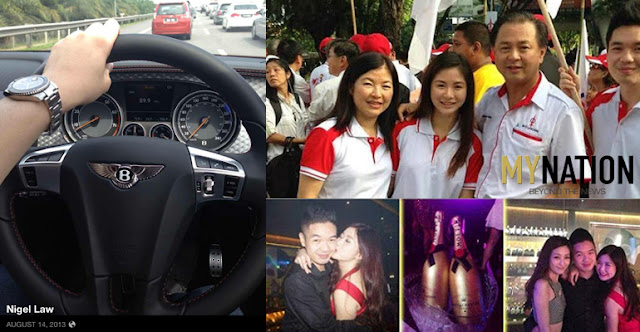 My heartiest congratulations to YB Danny Law Heng Kiang, the DAP’s Penang State EXCO for Tourism Development for having an illustrious and successful son, who are young and handsome as well. When I saw the pictures of Danny Law’s successful son, Nigel Law, that is making rounds in the social media, the first thing that came into my mind is that of Penang’s another famous son, Jho Low. 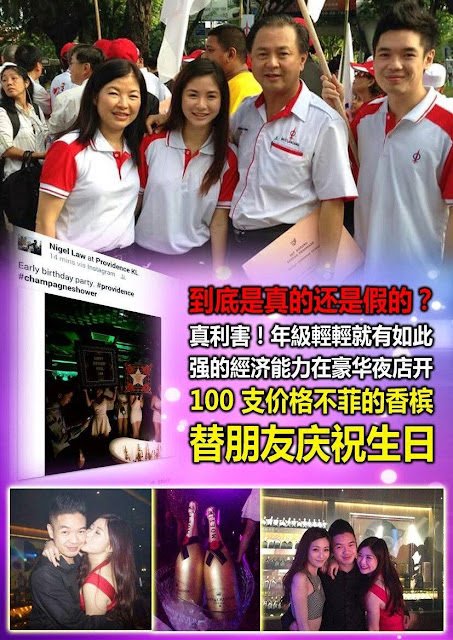 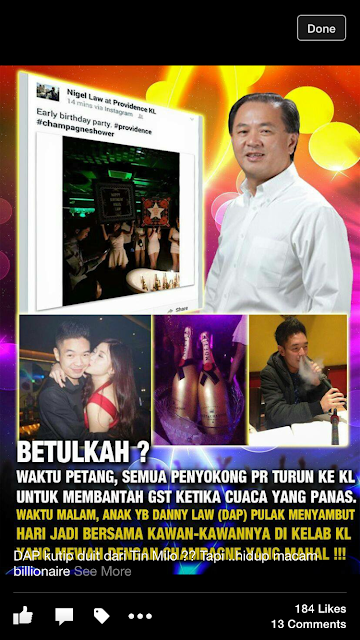 While Jho Low is well known for partying with the likes of Paris Hilton, Lindsay Lohan like there is no tomorrow, with bottles of Moet & Chandon champagnes in full view, Nigel Law is not too far behind either.
It is circulating in the social media that 100 bottles of this fine Moet & Chandon champagnes were corked open in Providence, a famous clubbing place in downtown Kuala Lumpur to celebrate Danny Law Heng Kiang’s son’s birthday party.
However, I can’t be certain of these 100 bottles of Moet & Chandon but Nigel Law’s Instagram account confirmed it that he had an early birthday celebration in Providence with accompanying pictures of him and sexy women and models and of course, the Moet bottles. 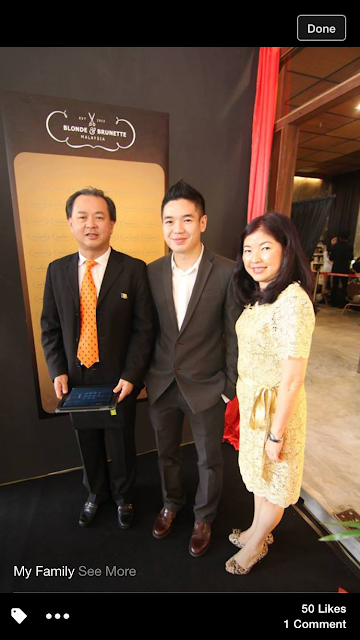 Out of curiosity, I also check on Nigel Law’s Facebook. I found out that he either own or co-own Blonde & Brunette Malaysia, a high society hair saloon in Gurney Paragon, which was officiated by his proud father, Danny Law in 2013.
More to this, also from Nigel Law’s Facebook is his picture of holidaying and staying in luxury hotels, dining at famous restaurants in Europe and many more pictures of him partying, always with a glass on hand. Ah…since watches worn by politicians are the talk of town recently, I’ve spotted Nigel Law wearing a Rolex Submariner.
And one picture from his Facebook account that I’m not too sure if it is him driving a Bentley but the watch on the driver’s left wrist and the one Nigel Law wore when holidaying in Siem Reap in December last year is identical. 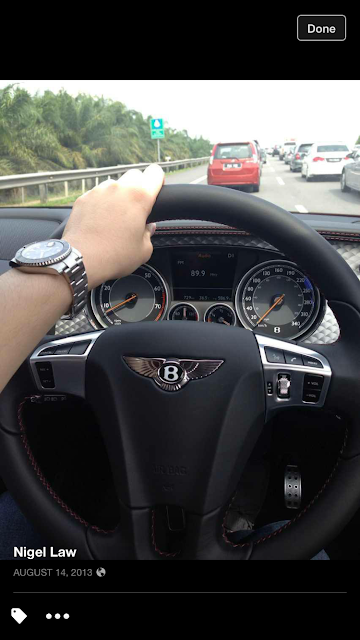 Oh well, don’t get me wrong, I am not a sour grape and I am not jealous of Nigel Law’s success.
In actual fact, I am amazed yet curious!  I’ve had plenty of holidaying around the world, dining in Michelin stars restaurants, dozing off in the luxurious hotels, cruise ships, trains to suits on plane.
I am very blessed that I am dining in J.W. Marriott Hotel Kuala Lumpur almost every week and the Sous Chef Wong Wing Yuk took personal care for my diet. I’m humbled to be chauffeured around by Azman in my Rolls Royce and other cars. I’m comfortable with my collection of Patek Philippe watches.
While I can account for how my source of current comfort and luxury comes from, and how hard I work for my current lifestyle, like other fellow Malaysians, we are curious about Nigel Law’s success. 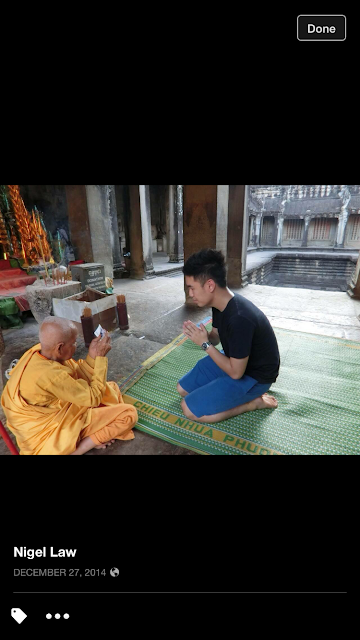 The DAP always preach that their government is one that is managing well the public fund, against the abuse of power, clean and without corruption, against dishing out favors for family members and etc etc.


There must be some magic here that I believe their form of government is being passed on to their leaders’ to manage their family affairs too, so surplus can be gained and can be splurged later on, because I remember that Danny Law Heng Kiang started his career as a bank officer before winning the Batu Lanchang state seat in 1999. He lost in 2004 but won in 2008 and became a state EXCO member. 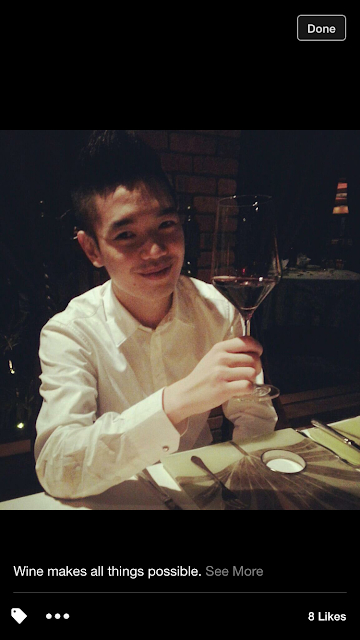 So, Danny, can you share with us your son, Nigel’s success story? His success story is amazing considering that when I knew you during my DAP’s days, you were just driving a Proton Wira and live in a medium cost apartment in Greenlane.
You were so jealous of me, a young girl at the age of 22, returning from NZ with a double degree, driving a brand new Camry and living in Gurney Drive and I thankful to daddy and grandfather, who were successful businessmen of their time. You can say my success is because of my daddy, and I would say, I am forever thankful to daddy. 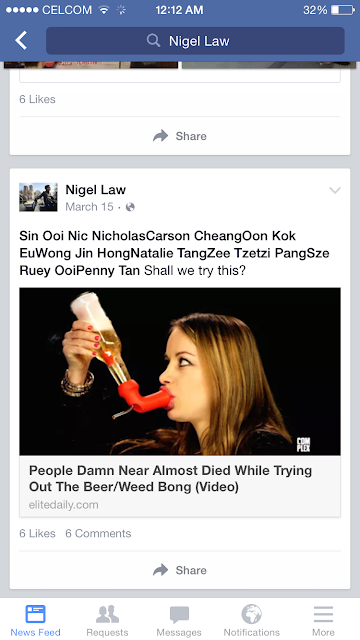 I remember that once, you even asked me to lower my profile because there are many jealous chaps out there. Then there was once, long after I’ve left DAP that you mentioned that you are still jealous of me and my success. I guess you might have forgotten that you said this to a journalist with and another comrade of yours. I’m myself, I am the master of my own money, and I have nothing to hide, so how can you ask me to be pretentious? Isn’t it your son has shown that hard earned money must be spent for certain comfort and luxury in life, which is very typical of Gen X and Y that your illustrious son and I belong to? 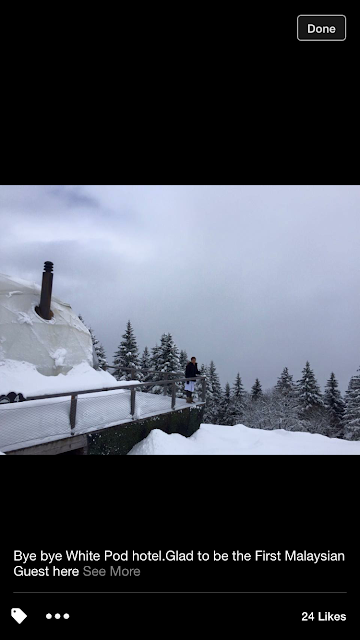 Aiyaa Danny Law, instead of being jealous of me, you ought to share your son’s Nigel Law’s success story so that fellow Malaysians can learn from Nigel the right way to get rich quick without any association with the corrupted Barisan Nasional that your party always accuses of. I think he can organize workshops and talks too, on how to be super rich before the age of 30 without the influence of dad.
It is good money these days to conduct talks and I am sure people will start queuing up from Jelutong to Johor Bahru to get an entrance ticket due to Nigel’s extraordinary story.
Or what about including the talk on how to get rich in Visit Penang programs that are run by your department, plus some special promotions when get a hairdo in Blonde & Brunette? Blonde & Brunette don’t charge RM1200 just to dye the hair, do they? Or they charge even more considering the high rental at Gurney Paragon?
Or Danny Law, are you going to say, the world has got the wrong identity of your son? The Nigel Law’s pictures circulating on the social media are not your son but a doctored picture by Barisan Nasional’s spinning doctors? But I don’t think the pictures are doctored. It is indeed your son! Maybe you’ve forgotten that I’ve met Nigel during your CNY open house. Ah…now I remembered that you mention that Nigel Law Hun Chuen was born in 1989!
So, Danny Law, the respected State EXCO from the “clean government” of Penang,  is it a deal to share with fellow Malaysian Nigel Law’s success story? Your party always preaches for transparency, didn’t they?


Editor: Jadryn Loo was formerly a political front-liner in the state of Penang and currently a practicing lawyer. She studied law and political science in the Kiwi land where she was involved in the politics there under the then Prime Minister Helen Clark. She is a fast learner and an avid reader with wide range of interests and politics is in her gene and blood since young. She also loves to travel and collect purple clay teapot and a Chinese tea connoisseur. She pens her thoughts at her blog http://jadrynloo.blogspot.my