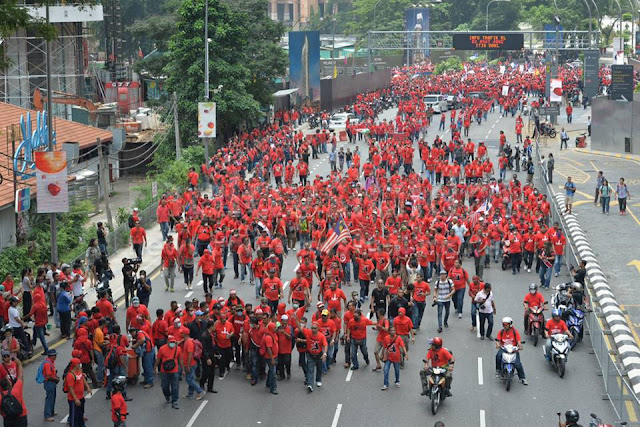 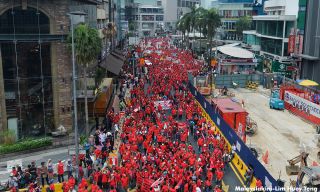 The crowd applause and take selfies with the FRU personnel as they clear the way. These are part of the participants marching from Jalan Conlay.

Some from Kelantan carry musical instruments like the gong and flute to entertain all during the march.
Others carry placards reading: "Cina DAP jangan kurang ajar di Malaysia" (Don't be rude in Malaysia, DAP Chinese) and "DAP pengkhianat bangsa" (DAP are traitors).

It says the buses are managed by third party bus operators and are only hired by the department on a contractual basis.
"PLKN stresses that the use of the buses for the rally is not our responsibility. We also did not approve any applications to use the bus for Himpunan Rakyat (Bersatu)," says the department.
Heat and haze take their toll
2.10pm: Masjid Negara - Participants start moving from Jalan Kinabalu to Padang Merbok while blowing their vuvuzelas.

Some opt to remain at the mosque, including a group of elderly participants who appear tired given the heat and haze.
Umno info chiefs joins rally because it’s ‘legal’
2pm: Padang Merbok - There are 1,500 participants at Padang Merbok. An announcement instructs them to collect their rice and curry lunch at a tent set up for the day.
Umno information chief Ahmad Maslan is unable to confirm the total number of participants.
"I cannot estimate how many are here, but we will soon find out when they all gather (at Padang Merbok)," he tells reporters.
The deputy minister says he is joining the rally because it is deemed legal by the authorities.
"This rally is to show support for government efforts in facing the various challenges including the slide of the ringgit. This rally is to urge for these problems to be resolved."
Homeless get free food and red T-shirts
1:50 pm: Jalan Hang Lekiu - Homeless people are given food and money as well as red T-shirts.

One homeless person says they are told to wear red before "jalan-jalan" (walking about) in the city.
"They gave us food, money and T-shirts. Then they ask to 'jalan-jalan'," he says.

There are almost 100 homeless persons in the area, all of whom are seen having lunch and wearing red T-shirts.

"We're not planning to go on a rampage or riot, we just want to go in," one protestor yells out in frustration to no avail.

Unable to enter, they march to Pasar Seni while chanting "Hidup Islam" (Long live Islam) and "Hidup Melayu" (Long live Malays), and then back to the Petaling Street entrance.
Haze in KL ‘moderate’
1.40pm: The haze problem appears not to be as serious as initially feared for the rally as the situation has improved since yesterday.

This is in contrast to yesterday's reading for Kuala Lumpur which was in the unhealthy region.
A reading of 51-100 is considered moderate, 100-200 is unhealthy, 200-300 is very unhealthy while above 300 is considered very hazardous.
‘Show Chinese DAP that Malays are in power’
1.20pm: Masjid Negara - About 5,000 participants are gathered here.
"Malays are defenders of Islam so we need to rise," says a participant, who refuses to be identified.

On the other side of the mosque, Federal Territories Umno Youth chief Mohd Razlan Rafii addresses participants from Johor.
"We gather today to show the Chinese DAP that Malays are in power. The other day, they stomped on a picture of Malay leaders but I don't see any stomping today. We must not behave in such a way," he says.

He then urges participants to perform zohor (midday) prayers before moving to Padang Merbok.

"Let's paint the mosque red," he says.
A National Silat Federation (Pesaka) member who only wanted to be known as Nabil says 500 Pesaka members are tasked to ensure safety at the rally.
5,000 march to Bukit Bintang to ‘rescue’ comrades
1:15pm: Jalan Conlay - The some 5,000 people here are now marching towards Bukit Bintang after hearing news that fellow participants there have been arrested.