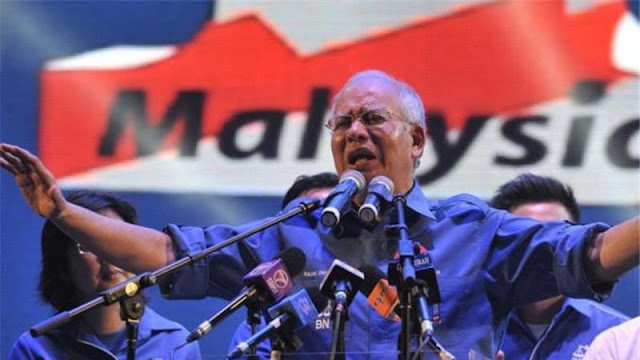 Malaysia's prime minister has urged his party to defend him against corruption allegations, saying that hundreds of millions of dollars in his personal accounts were donations received on behalf of the party.
Najib Razak lamented that some members of the ruling United Malays National Organisation (UMNO) 'join in the attacks against me' in spite of all that he has done for them.
'You must defend me for what I do is not for personal gain but for the party,' he told a gathering of party stalwarts in Kuala Lumpur.
'UMNO has conducted many corporate social responsibility activities, sent people to perform the Hajj and repaired houses,' he said.
'We have provided monthly allocations for the divisions to run their offices.'
'Don't say I'm selling the country,' said Najib, who is facing the most serious scandal since he took office in 2009.


'I am a prime minister who will take responsibility for everything I do. Don't think what I did was an offence ... I did it for the good of the party.'
A Wall Street Journal report last month suggested that about 2.6 billion ringgit ($A953.29 million) had been misappropriated from the state-run 1Malaysia Development Berhad (1MDB) and transferred into his Najib's accounts.
On Saturday, leaders from both the opposition and UMNO criticised the transfers of two officials involved in the investigation.
Bahri Mohamad Zin, Malaysia Anti-Corruption Commission (MACC) director for special operations, was transferred on Friday to the office of the prime minister without explanation.
His office was one of the agencies looking into allegations that hundreds of millions of dollars in Najib's accounts came from 1MDB.

Rohaizad Yaakob, the commission director for strategic communication, was also transferred to the prime minister's office on Friday.
Wan Azizah Ismail, wife of jailed opposition leader Anwar Ibrahim and leader of People's Justice Party, called on her supporters to demonstrate in support of the investigating agency.
Sports and Youth Minister Khairy Jamaluddin expressed dismay over the interference in the investigation by Najib's office.
'I viewed the transfers of the officers as really strange and very disappointing,' Khairy was quoted in the pro-government Barisan Nasional Backbenchers' Club website.
Earlier on Monday, MACC said the 2.6 billion ringgit in Najib's accounts came from donations, rather than from 1MDB.
On Wednesday, the commission said the donors were from the Middle East. It did not say whether the donors were Malaysians or foreigners but that 'MACC has obtained explanation from the donors who originated from the Middle East and they have verified the donation'.
Najib will be asked to provide an explanation to the commission regarding the donations.
- Source: http://www.skynews.com.au
Share to: