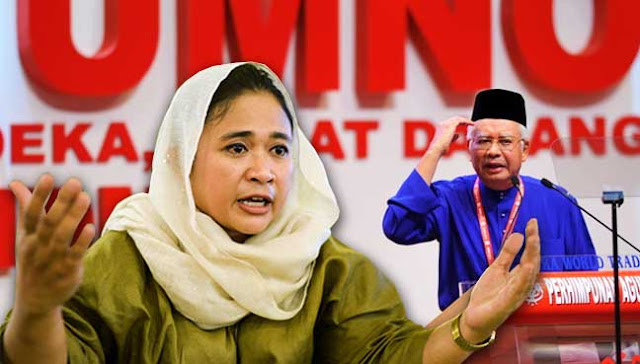 PETALING JAYA: More than 80% of Umno members have lost confidence in Prime Minister Najib Razak’s leadership, according to the Wanita Umno member who shot to fame recently with a speech in Langkawi that was highly critical of the Umno president.
In an interview with Malaysiakini, Anina Saaduddin claimed that 10 out of every 12 Umno members would answer in the negative if asked whether they had confidence in Najib.
She said Najib must have been “hallucinating” when he claimed to have the backing of three million Umno members, which is a rough figure of the party’s total membership.
“When Najib said he had the support of three million Umno members,”she said, “what was that based on? A poll, a meeting? To me, it is deception.
“I ask that Umno members send him to a doctor because he might be hallucinating. He does not realise what he says and what he does.”


In her speech at the Langkawi Umno annual meeting last weekend, Anina said Najib needed medical treatment because he had been “urinating” on Umno members. “Urinate” is used as slang in some Malay communities to mean “lie” or “cheat.” Anina’s speech was recorded on video and a portion of it was upoaded to the Internet, where it has gone viral.
In the Malaysiakin interview, she alleged that Najib himself was not confident of the support from the majority of Umno members, saying his decision to postpone the party elections was proof of this.
“On what basis does Najib say that three million Umno members support him when the Umno elections have been postponed to 2018?
“How does he know that the support of party members is permanent? If the elections are postponed, this means that he is not confident of defending his post if the elections are held next year.”
Anina accused Najib of “abusing the people’s trust” when he expelled his deputy, Muhyiddin Yassin, from the Cabinet.
“Muhyiddin was chosen by the rakyat,” she said, referring to his election as the Umno Deputy President. “Furthermore, he has not been charged with anything in the courts. So you have to justify his supposed mistakes.”
She said it was her love for Umno that prompted her criticism of Najib.
“I say all these things because I love Umno. Many people love Umno. It’s just that the rakyat’s confidence has eroded because the leaders have not been transparent.
“Scaring the MACC (Malaysian Anti-Corruption Commission) and reshuffling the Cabinet have shocked the rakyat as well as Umno members.”
She also said Umno members were scared of the consequences of Najib’s controversial actions.
Anina said if she were to be expelled from Umno, it would be for the “worthwhile cause” of “speaking the truth for the sake of the country’s future”.
“I did it to save Umno and Malaysia,” she said. “Not to save a president who is up to no good and who is not accepted by the rakyat.”