NAJIB & ROSMAH HAVE TURNED M'SIA INTO A MAFIA COUNTRY 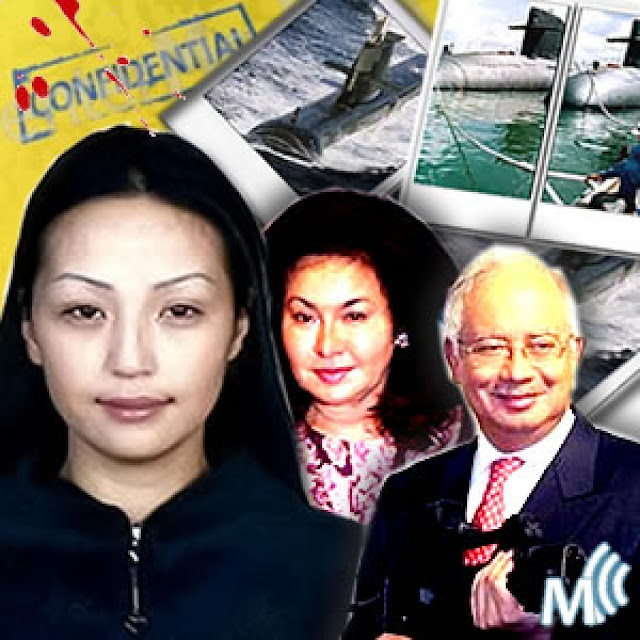 I thank The Economist, an international publication from London, for the honour and pleasure of being able to address senior representatives of the corporate world here today, and to speak about my favourite subject: Power struggle in Malaysia.
Malaysia is a wonderful country — at least, it used to be. Over the past 25 years, average GDP growth has been about 6 per cent, making this one of the wealthier countries in Asia. For many years, Malaysia was known as a place where good people live happily; and where you can make money. But wealth and greed has changed the characteristics of both our leaders and our government.
Malaysia today is a land of “cover ups”. The government is actively engaging in doing everything in their power to cover up mismanagement, corruption, abuse of power. The people especially the opposition leaders and those active in social media today live in fear of the Prime Minister and his hatchet men. Our public institutions are in disarray and their independence is under assault. Gani Patail, then Attorney-General, was just removed last week when he was about to close in on the Prime Minister during his investigation into the 1MDB scandal. I am worried for our Central Bank Governor Zeti, that she will be humiliated like Gani Patail, unless she play ball. As we speak the Police are conducting raids on other enforcement agencies, apparently looking for so called “leaks” of investigation papers.

Maybe the Police and the new Attorney General under Najib have not heard of offences relating to obstructing public servants from doing their job! If anyone, including the Prime Minister and/or the Attorney General are involved in “obstruction of a public servant in the discharge of his functions” then section 186 of the Penal Code is relevant. I would like to advise the new AG that while supporting the Prime Minister is a wonderful thing, we have laws that everyone has to follow!
Today, Malaysia has the look and feel of a Mafia organisation. Lots of cash and rewards by way of “official” positions are used regularly to ensure obedience. Dissidents are removed or obliterated. The Mafia brook no dissent against the Numero Uno; the Supreme leader and it’s the same here. This past Saturday, students and young activists were hauled up by the Police just for expressing their disgust towards the Prime Minister.


We have the earth shattering news, confirmed by none other than MACC that our Prime Minister had RM 2.6 billion in his personal account. And a couple of million in his wife’s account. That’s not to mention other accounts they might have overseas. Not a single officer from the Police dare to probe and haul him up for questioning. Maybe the MACC would, but for now none was reported. He is still free to tell funny tales parroted by his “loyal” servants in the Cabinet that the money was a political donation. These Cabinet members are clowns, who are happy to support a leader with the stupidest excuses they can think of. They are an embarrassment to the country. Former Deputy Prime Minister Muhiyuddin Yassin was asked to leave because he was asking too many questions about 1MDB. I am glad for Muhiyuddin and his family that he was sacked; at last he can breathe fresh air in Bukit Damansara and not having to tolerate the stench in Putrajaya.

Our public institutions have always been deferential to the wishes of UMNO leaders, in the past but they maintained at least some independence and integrity of public office. Today however, there is nothing to talk about institutional independence, and their ability to provide checks and balance in the system is non-existent. Top civil servants turn a blind eye to abuse of power if they get 30 pieces of silver, or a promotion. Some have taken the easy path of submission and accept the rewards available to those who are loyal. Integrity of public office can wait! Those who dare to expose wrongdoings are sacked and humiliated .The others who are unhappy seek comfort from Allah in their prayers. They are our unsung heroes.
In Malaysia we have an important Parliamentary Accounts Committee looking into the scandal involving 1MDB. The Prime Minister removed four of them and made them Deputy Ministers, including the PAC Chairman. By so doing he scuttled the Committees work and gave 1MDB officials time to sort things out. Nur Jazlan, the erstwhile Chairman, obviously thinks it’s not worth his while finding the truth about 1MDB, because he would never be allowed to find it; and so he decided to join Najib’s cheerleaders group instead. He said it was more challenging to be in the Cabinet. Maybe someone needs to tell him a Deputy Minister is not a member of the Cabinet! Anyway good luck to him; for he now joins the distinguished company with Rahman Dahlan, Azalina Aziz, Salleh Keruak, and Ahmad Maslan. It is indeed a more challenging position to peddle inconsistencies than to ask questions.
So how is it that someone like Najib, who has been dogged by one scandal after another, can still command support from his party and the Government? And what kind of people are we who can allow such things to pass without comment?
The answer lies in the structure of Malay politics in this country. For generations, UMNO has ingrained into the minds of Malays — especially rural Malays — that the future of the Malay people depends entirely and exclusively on UMNO.

Only UMNO can protect Malays from all those vaguely-defined, so-called enemies. They will further say if UMNO somehow was “gifted” with 2.6 billion Ringgit from some brother Muslims in the Middle east to ensure Muslims leaders like Najib continue to rule Malaysia; then minor infractions here and there should not matter. If some UMNO leaders receive “donations” from local tycoons they will say it’s for the country and for Islam. If the Government says there is a Western conspiracy to topple Malay leaders, some Malays will believe it. The Prime Minister’s bloggers and psy-warriors (who are well paid) are already hinting that this money came from our Muslim brothers in the Middle East to ensure UMNO’s continued rule . This way Muslims will be protected for a thousand years to come.
We are where we are because many of us are scared to speak up and defend what is right. We think that so long as the transgressions do not affect us why should we get involved. Only when the whole system becomes rotten, and the Police start behaving like the Gestapo then we realise our lives and our businesses are all affected. No one will be spared. So perhaps a rally of a 100,000 Malaysians is necessary for two reasons: to show that Malaysians are not afraid to save this country and that the support for Najib is skin deep.
People may also be afraid because they have done something wrong in the past, or they may have been on the receiving end of some of Najib’s generosity whilst they were in office. They don’t want to be humiliated and publicly mauled by a media that remains under the control of Najib’s men. Najib will continue to be ruthless, and for that he will probably remain in power for Najib is still strong because wealthy Malays and non-Malays are happy to lend him support in exchange for business and government positions. Many of them contributed immensely to UMNO’s coffers during the last General Election. If BN had contested all the seats (Parliament and States) they would only need Ringgit 94 million. But BN got more than 800 million Ringgit, even without using the 1MDB “donation” – in fact, UMNO/BN received so much money from the tycoons, that I doubt 1MDB secret fund was used at all during the General Election. It was just convenient to transfer the money before the election so that a story could be crafted that it was not for the Prime Minister’s personal use.
Given all of this, is there still hope for Malaysia? Yes and no. Because the Malays/Muslims who are fearful of Najib belong to the wealthy and the elite class which are smaller in number there is hope the majority will not be cowed by Najib. The majority of Muslims, who are in the lower 40% income bracket, listen to daily sermons that remind them to do justice; and fear only Allah and no one else. It will take some time for them to understand what is really going on in the country and to grasp how badly their leaders have betrayed them; but once they do, they will unleash a force so powerful that even this Mafia will not be able to stand up to it.
The danger, of course, is that this Malay-Muslim majority may be so disheartened by the leaders and our system of government that they will opt for ISIS-like Islamic militancy. ISIS was able to conquer large areas of Syria and Iraq because of the failure of Assad and the national leaders to address their problems. With the crooks stealing everything from the government coffers these Muslims in Malaysia might just decide one day Abu Bakar Al-Baghdadi is not a bad choice after all, in place of parliamentary democracy. We must remember that Islamic fundamentalism is on the rise in this country; because of Najib Razak, and his policies. Najib is earnestly courting the fundamentalist hardliners in PAS to defend him, and they are now like old buddies. The stability of this country is being threatened, and yet Najib remains a close buddy of Lee Hsien Loong, Obama and David Cameron. Strange world we live in.

Obama and David Cameron
For all his power, Najib is damaged goods. UMNO understands that it cannot win the next General Election with him still at the helm, (unless the election is rigged) so his “loyalists” will ask him to leave before the polls. Datuk Seri Zahid Hamidi has to be the next Prime Minister if the Barisan Nasional wants to prepare for the election. Najib and friends however will not relinquish their position in Government; and with Muhiyuddin launching his forces from the south, we can expect an internal bloodbath within Umno soon. Again the stability of the country is at risk, at very high risk.
Najib is also damaged goods for the region,. Malaysia is the chair of ASEAN in a watershed year. This year we are supposed to inaugurate the ASEAN ECONOMIC COMMUNITY where Asean leaders will meet leaders of China, Japan, Korea, Russia, US, India and many others; and can you imagine Najib Razak chairing this summit ? What will these countries think of Asean that condone or closed one eye on corrupt practices of its leaders. What will be in the minds of business leaders wanting to invest in the region when the Chairman of ASEAN has billions in his account from “donations’ of friends and supporters? What do you think they will saying to each other?
Back to Malaysia, the opposition grouping has a small chance of winning the next general election if the election is not rigged. However they need to start working together; as their main stumbling block is putting a national leadership team that people can recognize. They need to name an opposition leader as Prime Minister candidate. Some of you have asked me if the opposition leaders are well qualified to be Prime Minister; and the answer is yes. Many of them are honest. They do not know how to collect huge donations, do not have offshore accounts and they do not need private executive jets for their travels. - http://www.zaid.my/