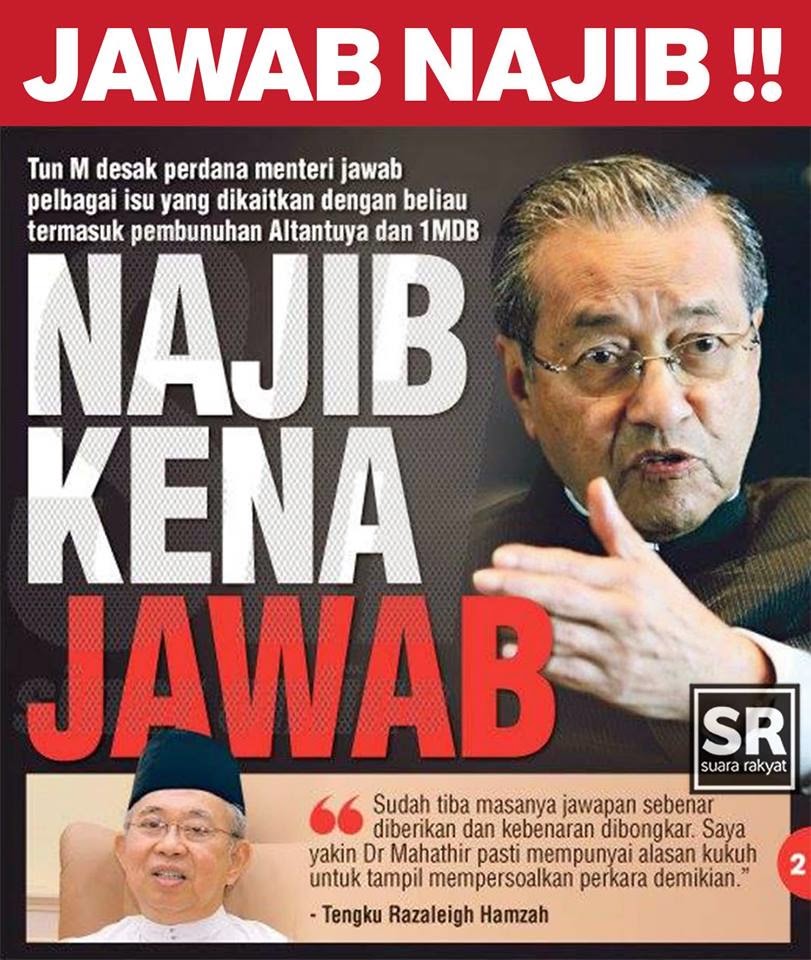 Any attempt to oust Datuk Seri Najib Razak as prime minister through a vote of no-confidence in Parliament will very likely not succeed, said Tun Dr Mahathir Mohamad.

Writing in his blog, the former prime minister said this was because nearly all Umno members seemed to be backing Najib, despite strong public opinion in wanting him to go.

"Consequently, there is talk about moving a vote of no-confidence against him in Parliament.

"This is very difficult as almost all the Umno members seem beholden to him. And the opposition does not have enough members to pass the motion," he wrote in chedet.cc today.
Malaysia's longest serving prime minister's views came amid a bombshell by Deputy Prime Minister Datuk Seri Ahmad Zahid Hamidi on Saturday that an Umno leader is behind a plot to topple the government with support from opposition lawmakers.

Zahid, who is also Umno vice-president, said he had learned that they were preparing statutory declarations (SD) to remove the government.

"There is an effort to obtain SDs among the opposition lawmakers and to pull in Barisan Nasional (BN) lawmakers to topple the government.

"I received this information from very trusted sources. This effort is going on... the strange thing is that it is led by an Umno, BN (Barisan Nasional) member," Zahid had said when officiating the Ampang Umno division meeting over the weekend.

Last night, Zahid confirmed Muhyiddin was not the leader he was referring to, but instead said it was an "elderly" senior BN leader who’s "ambition was never small".

Up to 20 Umno MPs were named by a blog to be behind the plot to topple the government, but this has been vehemently denied by some of them, who had lodged police reports against the blog, calling it slander.

Dr Mahathir, who was formerly Najib's supporter turned harsh critic, said a no-confidence vote against a sitting prime minister needs only a simple majority to pass.

But he warned that if the prime minister falls, then the entire government would fall as well.

"But by majority decision in Parliament, a new government may be set up. It may be the same party or a different party. Alternatively an election can be held," he said, adding that these are avenues of legal redress provided by the Federal Constitution and laws.

Malaysia's longest-serving prime minister said in other countries, more violent methods are used to remove an unpopular president, whether elected or imposed by the military or other politically powerful groups.


"Now Malaysia would not want to see violence used. So the instruments or the institutions of governments were expected to investigate and determine whether the allegations against the PM are true or not.

Dr Mahathir said there are also special bodies created to oversee how government money is managed, citing the Auditor-General, Parliament's Public Accounts Committee and the Malaysian Anti-Corruption Commission as examples.

"They are, however, limited to investigations and preparation of reports. They themselves have no power to prosecute.

“For this, the Attorney-General must decide and initiate legal proceedings. If the A-G decides there is no case to answer, even the most blatant crime will not be tried in a court." – August 17, 2015.