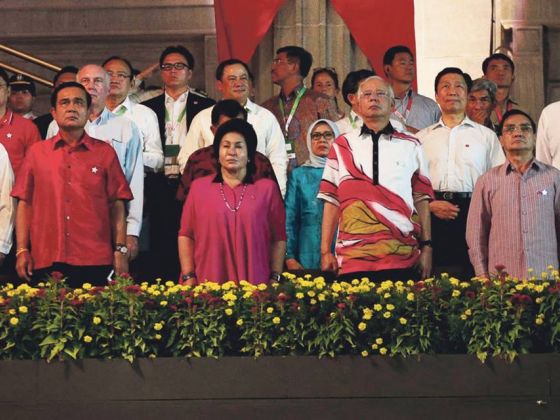 KUALA LUMPUR — Singapore and Malaysia make good partners, said Mr Najib Razak in a National Day’s message to the Republic on its 50th anniversary.
In the message uploaded to his blog today (Aug 10), the Malaysian Prime Minister added he will continue to “work closely” with Singapore Prime Minister Lee Hsien Loong to “bring real benefits to all Malaysians and Singaporeans”.

Mr Najib, who attended Singapore’s National Day Parade at the Padang along with six other heads of state and heads of government on Sunday, said: “The reality is that we share your aspirations for good governance; for a strong, inclusive and sustainable economy based on sound fundamentals; and for stability, harmony and diversity.
Mr Najib also noted the current political situation in Malaysia, and urged Singaporeans not to judge its neighbouring country “by what they may read on social media, or by politically motivated statements from certain quarters running down our country”.
Mr Najib’s comments came as he was grappling with allegations that nearly US$700 million was rerouted to his personal bank accounts from state-owned company 1Malaysia Development Berhad (1MDB). Both Mr Najib and 1MDB have denied any wrongdoing.
Meanwhile, former Malaysian prime minister Dr Mahathir Mohamad slammed Mr Najib’s spending and lavish lifestyle. In a blog post on Monday, Dr Mahathir said the claim that the billions of dollars were needed for elections is ‘absurd’.
“I needed less than 10 million (ringgit) for each of the five elections I presided over and I won them all with more than two-third majority. Why do you need 2.6 billion ringgit?
“To me, two billion plus (ringgit) for elections in Malaysia by any party is wrong even if no limit is put on election expenses.”
Dr Mahathir also accused Mr Najib of spending billions of ringgit on events such as engagements and weddings, far in excess of the 20,000 ringgit Mr Najib receives as his salary and allowances paid to the Prime Minister. CHANNEL NEWSASIA