BN MP: Najib doesn't need to pay tax on RM2.6b & No need to reveal source, too 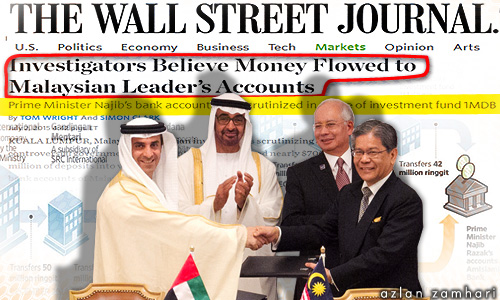 BN Backbenchers Club chairperson Shahrir Samad has insisted that Prime Minister Najib Abdul Razak need not pay any tax over the RM2.6 billion that was deposited into his personal bank accounts.

According to him, this was because the tax should be borne by the donor and not the recipient, according to a Utusan Malaysia report today.

Furthermore, Shahrir, who is also Johor Bahru MP, said the Inland Revenue Board (LHDN) was aware about the money.

"LHDN was surely aware as the donor is not exempted from income tax but the recipient does not need to pay taxes on the donation he receives," he said.


Sharir added that there was only a need to pay taxes had the donation was made after the implementation of the Goods and Services Tax (GST) in April this year.

"After April 1, 2015, GST is imposed on donations of more than RM500,000 but I am unclear if political donations are exempted," he was quoted as saying.

The deposits into the PM’s accounts reportedly took place from March 2013 to February 2015.

No need to reveal source, too

Shahrir also stressed that there was no need for Najib to reveal the source of the funding, which is said to be from an unnamed Middle Eastern source.

"Since when political donations and funding have to be revealed to all?" he said.

However, Shahrir said he supported reforms to political funding to make this a requirement in future.

Akmal had posted 15 questions after expressing skepticism that the RM2.6 billion was not from state-owned 1MDB and was instead political donations from the Middle East.