文：Joe Fernandez
文字翻译：张丹枫
Shahbudin: Najib’s ‘fate’ lies in Zahid’s hands
Joe Fernandez August 5, 2015
KUALA LUMPUR: A political analyst, taking to his blog on the Malaysian Anti Corruption Commission (MACC) statement virtually clearing Prime Minister Najib Abdul Razak of wrongdoing on the unexplained RM2.6 billion in his personal banking accounts, has pointed out that the people are still convinced that the Prime Minister is guilty. “The onus is on him to prove his innocence. No right-thinking people will accept the RM2.6 billion as donation money.”

“Najib must not think that he has escaped the law just because the MACC has issued a statement virtually clearing him of wrongdoing. He will not escape in the Court of Public Opinion as witnessed in the social media complete with caricatures, cartoons, cynicism, sarcasm and insults.”
In fact, added Shahbudin Husin, Najib has now come under even greater public scrutiny following the MACC statement on the RM2.6 billion. “The people see the MACC statement itself as a further example of wrongdoing on his part."
The Sarawak Report, The Edge Media Group, Muhyiddin Yassin, Shafie Apdal, and Abdul Gani Patail are seen as sacrificial lambs to ensure that Najib can continue as Prime Minister, said Shahbudin. “However, since Muhyiddin is out of the Cabinet, the ball is now in Home Minister and Deputy Prime Minister Ahmad Zahid Hamidi’s court.”
It remains to be seen, said Shahbudin, whether he wants to go along with Najib as Prime Minister or he will do something to be remembered for a long time by the people. “Clearly, Najib has become a liability to Umno and the Barisan Nasional (BN).”
Zahid, he thinks, will receive full support if he publicly puts pressure on Najib to come clean on the RM2.6 billion and the RM42 billion 1MDB Scandal. “If Najib continues to remain silent, his position will become untenable and Zahid can force him to step down as Prime Minister.”
“Umno members will believe Zahid and give him their full support. They will quickly abandon Najib. Zahid has strong support within Umno, tried and tested through party elections, unlike Najib in recent years. Zahid will have the support of Muhyiddin and Shafie as well. They know that supporting Najib is not the right thing to do.” 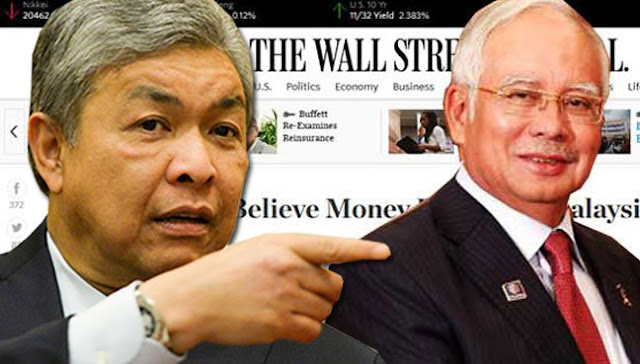 Shahbudin remains confident that Najib will not kick out Zahid too from the Cabinet. “After Zahid, who will he kick out to save himself?”
Zahid, said the analyst, just has to get Najib’s cousin Hishammuddin Hussein Onn on his side as the new Deputy Prime Minister. “His Home Ministry will be an asset to him in ensuring that the laws are upheld and that Najib cannot be considered immune to them.”
Continuing to appeal to the people to support Najib, despite the RM42 billion 1MDB Scandal and the RM2.6 billion controversy, is not an option, he pointed out.
“The RM2.6 billion is being linked with corruption and money laundering. The government departments have regulations against even receiving hampers, what more RM2.6 billion in donation money.”
If Najib was just an office boy or despatch boy, not the Prime Minister, said the analyst, surely no one would donate RM2.6 billion to him. “He should not delay in disclosing from where the RM2.6 billion was obtained, how it was spent, what remains, and why his personal banking accounts with these funds were closed.”
“The MACC should rethink its statement on the RM2.6 billion, and the police and Attorney General too should look again at the matter given that the public reaction has become increasingly hostile on the manner in which the authorities have handled the matter. The longer that Najib keeps his silence on the matter, the worst it will become for him even among Umno members. They will not accept him having RM2.6 billion in his personal banking accounts for no rhyme or reason. They feel betrayed by Najib and the Umno leaders.”
If Najib refuses to explain the RM2.6 billion, he warned, not only will the anti-corruption laws become the butt of jokes, even more politicians will have an excuse to keep unlimited and unexplained funds in their personal banking accounts with the excuse that they were donations.
The Facebook posting by Johor Menteri Besar Khaled Nordin’s son, Akmal Saufi, is one example, said Shahbudin. “The RM2.6 billion issue will be the greatest contributing factor to the people turning against Umno and this will be seen come 2018 during the 14th General Election. Muhyiddin’s warnings that a 2 per cent drop in support for Umno will see the party crashing to a defeat will come true.”
http://www.freemalaysiatoday.com