Anti-Bersih group protests against Bersih 4. Najib Paid Them to do that? 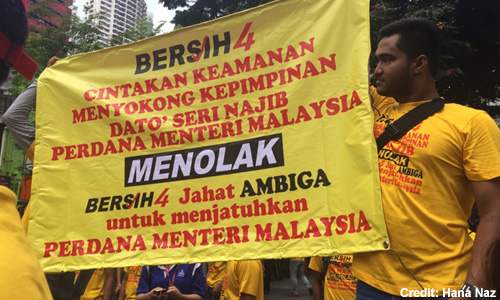 About 100 people held a peaceful assembly organised by Gabungan NGO-NGO Malaysia (GNM) in front of a shopping complex in Jalan Tuanku Abdul Rahman here today to call on police to stop Bersih 4.0 assembly scheduled to be held on Aug 29 and 30.

Its chairperson, Jamal Md Yunos (photo) said firm action should be taken as several previous Bersih assemblies affected the country's peace and jeopardized the image of the country in the eyes of foreign tourists.

"I am calling on police to take stern action against its organisers, especially its chairperson, Maria Chin Abdullah.

"I am calling on police to arrest and charge those involved as previous assemblies brought a host of problems," he said when speaking at the assembly in front of Sogo shopping centre in Kuala Lumpur today.

He added that the organisers should declare how they obtain their funds to hold the assembly.

"As such, I am calling on police to investigate how Bersih obtain their funds," he said, adding that the assembly had affected the operation of business in the area.

The assembly today was attended by 15 non-governmental organisations such as the Malay Army Veterans Association, Ex-Army Traders Association and the Mind and Social Care Organisation.

The reports were also made against a statement issued by Marina via YouTube recently.

Bersih 4.0 assembly is scheduled to be held for two days on Aug 29 and 30 at three locations namely Kuala Lumpur, Kuching and Kota Kinabalu.
Source: Malaysiakini