Another financial scandal in the making?

0 热点新闻 Hot News, 热门话题 Hot Topics 4:30:00 AM
A+ A-
Print Email
Top ranking Home Ministry officials are already in Bangladesh, in an attempt to bring in 1.5 million workers over the next three years. 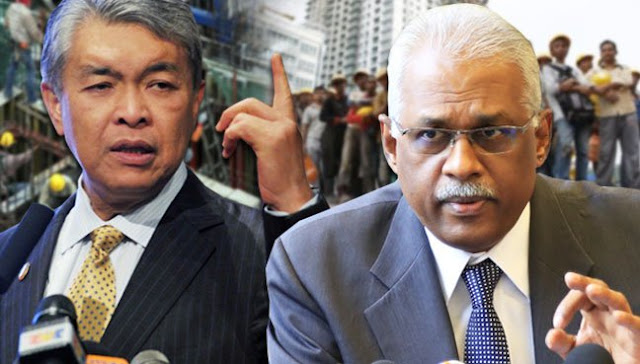 We don’t need another financial scandal. But it looks like the Deputy Prime Minister, Ahmad Zahid Hamidi, will deliver it on a silver platter.
The Home Ministry is yet to conduct a Labor Market Needs Assessment Study to justify the number of workers required in the next few years.
The comprehensive study must include skill needs, requirement and gaps, including a projection of employment by industry and sector.
None of this has even been looked at. But top ranking Home Ministry officials are already in Bangladesh, in an attempt to bring in 1.5 million workers over the next three years.
And in a not so shocking turn of events, Zahid’s younger brother, is also there.
Abdul Hakim Hamidi’s firm has been holding talks between Dhaka and Putrajaya to provide an online system where, for a fee, workers can be registered and monitored from Bangladesh and Malaysia.
Talking about another financial scandal, let’s do the math: at three thousand ringgit per worker, Hakim’s firm stands to make a whopping 4.5 billion ringgit for the 1.5 million Bangladeshi workers, if he is given the contract.
Zahid too seems to be following in the footsteps of his boss, Prime Minister Najib Razak.
He admitted there is an existing pool of workers in Malaysia. Then he presumes Malaysians simply won’t take on these jobs.


The Deputy Premier said he hasn’t been in touch with his brother, but sent a note to the Secretary-General of the Home Ministry about Hakim’s bid.
These are all tell tale signs of a brewing financial scandal.
Zahid said all undocumented workers will be sent back before the 1.5 million Bangladeshi workers are brought into the country. But he has not bothered to explain how this will be done. It’s crucial he spells out his strategy as past efforts have fallen flat.
The Deputy Prime Minister is putting on a puppet show by blatantly lying to the Malaysian public that the government is concerned about unemployment in the country.
In fact, Zahid is doing the complete opposite by destroying the job opportunities for the people of Malaysia, not to mention suppressing wages as well.
Last week, Bangladesh’s Expatriates’ Welfare and Overseas Employment Minister,Nurul Islam, said that a delegation from Malaysia will finalise a deal in the coming days.
But this process has now shifted from a government-to-government process (G2G) to business-to-business basis. Could that explain why Zahid’s brother is directly involved in this recruitment exercise?
Zahid has also much explaining to do about recruitment of these workers and how it would create 1.5 million new jobs with a boost in labour productivity, while reducing the country’s dependence on low-skilled workers as stipulated in the 11th Malaysia Plan.

And he needs to clearly spell out if Malaysia would recruit workers from other countries as well, as this would take a whack at the local labour market.
But as this whole exercise reeks with corruption and nepotism, I urge the anti-corruption commission (MACC) to scrutinize Zahid and his plan.
And this deal should be shelved until a special commission is formed to study Malaysia’s labour force needs for the next decade.
Otherwise, we could be looking at yet another huge financial scandal and Malaysia hogging the international limelight for all the wrong reasons, yet again.
Charles Santiago is MP for Klang.
With a firm belief in freedom of expression and without prejudice, FMT tries its best to share reliable content from third parties. Such articles are strictly the writer’s personal opinion. FMT does not necessarily endorse the views or opinions given by any third party content provider.
Share to: