A leader who has lost the confidence of lawmakers can be removed under law. 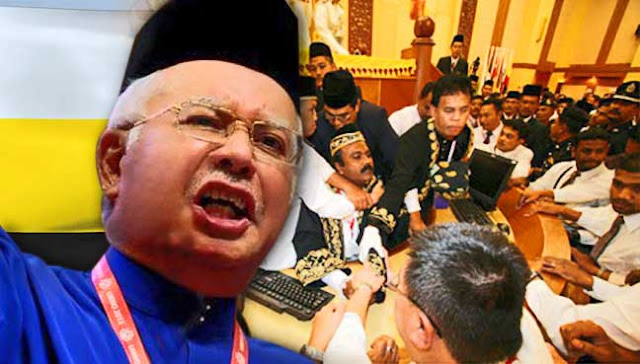 KUALA LUMPUR: Raub MP Mohd Ariff Sabri Abdul Aziz wants to know where’s the illegality if the same method used in Perak in 2009 was used to dismiss Prime Minister Najib Abdul Razak. “Some members of his own party are also convinced that Najib is a menace to the country.”
“We are using the same legally sanctioned means.”
He charged that only Home Minister and Deputy Prime Minister Ahmad Zahid Hamidi and some people refused to hear what was being spoken by Umno members themselves. “Can the very loud dissent within Umno itself be categorized as a plot to topple the government?”
If Tengku Razaleigh commands the confidence of the majority of the MPs and succeeds in securing the necessary and sufficient constitutional endorsements, he asked, what’s wrong with him becoming Prime Minister to save the country?”
“The country now needs saving.”
He advises against indulging in the term toppling. If we do, he said, then we constraint ourselves to that term. “The talk of toppling Najib and all, that’s boorish. Only the military topples governments.”
Democrats use more polite means, he explained. “Employ the instruments of democracy to remove a government and its leader. Especially one that flouts the law, indulges in corrupt practices, abuses power, embezzles money and becomes a menace just by staying in power.”
“The right to recall, the right of recall is an intrinsic part of democracy.”
The method used by Zambry Kadir, the present Perak Menteri Besar from Barisan Nasional (BN) when toppling the Nizar government was now the law of the land, argues Ariff. “I suppose that’s beyond the understanding of Zahid.”
“Maybe he has not heard of a motion of no confidence. He hasn’t heard that even a democratically elected president can be impeached. He hasn’t heard of provisions in the Constitution providing for the dismissal of an errant leader from office.”
A leader from the Opposition, continued Ariff, of which Zambry was then, simply presented himself before the Sultan and submitted that he commanded the support of the majority of the assemblymen. “The Sultan was convinced of the pleading and without even calling for the Perak Assembly to come into session, acceded to the pleading. Zambry became Menteri Besar.”
Ariff asks: “Did the Sultan then inquire into whether the pledges of the alleged majority assemblymen submitted through Zambry then were based on a mere belief formed on the basis of lies, innuendoes, insinuations and fabricated allegations supported by doctored evidence?”
The answer was no, he said. “The Sultan took the pledges presented through Zambry as representing what it was, a message and plea from the assemblymen that they have lost confidence in the then sitting Menteri Besar. That was it.”
By law, said Ariff, Zambry Kadir became the legitimate Menteri Besar. “Likewise, the overall feeling in Umno Johor is that Najib should go.”
“Will that be considered a plot to topple?”

An Umno Wanita leader from the Pasir Gudang Division presented a memo to Najib asking him to take leave, he reminded. “He must have thought it was the usual submission to help in tenders or business. But it was a polite way of asking him to go on permanent leave.”
An Umno Wanita leader in Langkawi publicly said that Najib urinated on 3.2 million Umno members, meaning that Najib deceives them, said Ariff. “The solution was to ask Najib to take a medical check on his mental state. It is a polite way of saying Najib is sick in the head.”
The Umno Tampin Youth said it most clearly, said Ariff. “Najib should resign. Najib’s staunchest sycophant Ahmad Maslan got a dressing down in his own division.”
source from:FMT