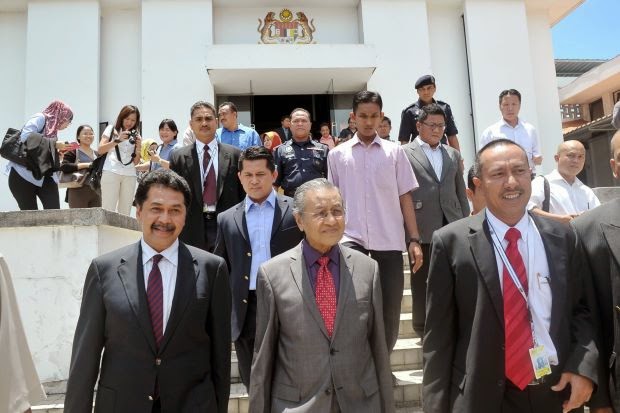 Tun Dr Mahathir Mohamad has blamed aircraft manufacturer Boeing for the missing Malaysia Airlines (MAS) flight MH370 and said the company should explain how it could have produced a plane with
communications and tracking systems that were so easily disabled.

In defending the national carrier which had been blamed by upset relatives of the 239 passengers on board, especially those from China, the former prime minister said he was upset that Malaysia Airlines staff were heldfor more than 10 hours in a hotel in Beijing yesterday.
The families in Beijing had expressed dissatisfaction in obtaining details of the missing aircraft, MAS had said.
"I am upset because they are blaming the wrong people. The loss of the plane is due to the makers Boeing.
"MAS is not at fault, lax security or not. MAS flew a plane fully expecting it to perform the task. But the plane has somehow behaved differently. Who is responsible? Not MAS but certainly the makers of the plane – Boeing Aircraft Corporation," Dr Mahathir wrote in his blog chedet.cc.


The country's longest serving premier expressed surprise that with today's array of vast and sophisticated technology to track all passenger planes, no trace of the Boeing 777-200ER aircraft had been found.
"Boeing built this aircraft. Boeing must explain how all these means of tracking the plane can be disabled, can fail. Either Boeing technology is poor or it is not fail-safe.
"I would not like to fly in Boeing aircraft unless Boeing can explain how all its system can fail or be disabled," he said.
He added the onus was now on the company to demonstrate possible ways for the plane's communications system to be disabled, adding that the manufacturer must accept responsibility for building an aircraft that could vanish so completely.
Dr Mahathir said remote control technology was now very sophisticated and powerful and wondered whether Boeing had installed remote control equipment on the aircraft to prevent any hijacking attempts.
"If it did why did it not direct the aircraft to land safely? Is it possible for third parties to take control of the aircraft remotely?"
He also noted that it was a standard practice that when a plane crashes, a team of experts would arrive at the scene soonest to find the cause of the crash, but lamented that Boeing had shown no interest and had continued to keep mum.
"Boeing and the authorities in the manufacturing country should be looking out for the plane. Maybe the plane type should be grounded," he wrote.
In further defending MAS, Dr Mahathir said the carrier had been flying with numerous aircraft, has a good track record and well-trained crew.
"Even if the pilot wants to commit suicide, the co-pilot and the cabin crew would not allow him to do so without trying something. But no one, not even the passengers did anything. Maybe it is because they have been somehow incapacitated," he said.
To date, a multi-nation search for MH370 in the Indian Ocean – where it is believed to have ended – has not yielded anything.